Hello everyone, this tutorial will guide you through the process of creating a fully tank rig system in 3ds max, well... maybe not fully but certainly with a lot of tools to make a realistic tank animation, actually, when you've learned this, you'll be able to make a car rig too with a little modifications. This is a medium-level tutorial, so you need some knowledge with the max's rigging tools (bones, IKs, constraints, and so).

What you're gonna learn:

With this system our rig will be able to detect a ground and adapt itself over the ground's surface, we will only need to animate a point through a spline path. The system could work without that spline, but the fact is that the next features of this rig need this usage. There are more complex systems that work pretty fine only with transform keyframes, but they're history dependant and consume more cpu resources than this one, maybe later on we'll be checking those methods. 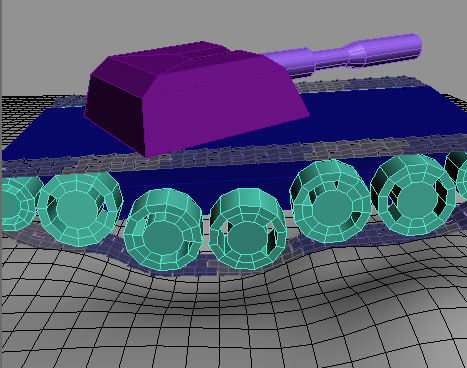 This system makes the animator's life easier, well... it's what a rig suposes to do. Having a path where the tank will going to travel we're going to define the wheel behavior in respect to this distance. Here we're going to use some scripting and some high school math, but don't be afraid! if you haven't tried these stuff yet, now we're going to learn, it's not hard, trust me, in fact, all the math that we're going to use will be multiply and divide. 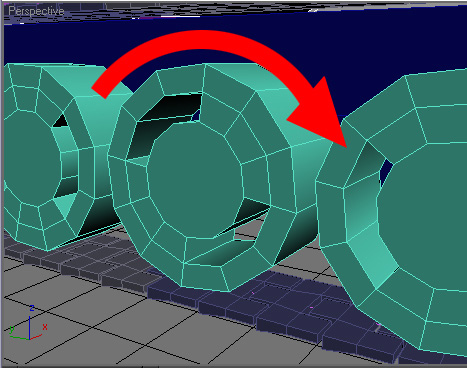 The caterpillar band will be composed on several pieces slidding through a spline which will be projected to the ground too, this is more realistic than other systems like using a path deform modifier over a whole caterpillar band, that's because each caterpillar's piece has its own behavior instead of beign rubber-deformed like the path-deform method. here we're going to use script controllers too, very similar to the wheels system. and some iterative macro operations. This last one will be very useful for a lot of tasks for other kind of projects, in a few words it means to do a lot of repetitive tasks in a few lines of code. 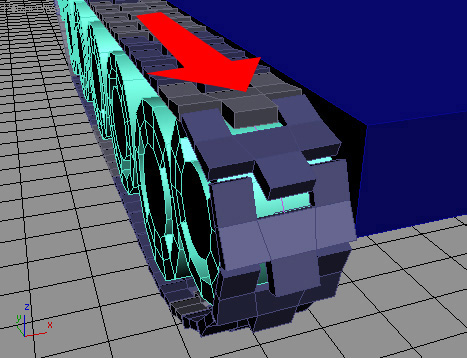 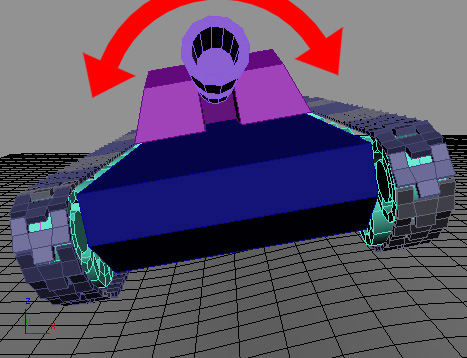 Finally, we'll be making the cannon's rig. this one is a piece of cake, we'll be playing around with some look-at constraints. 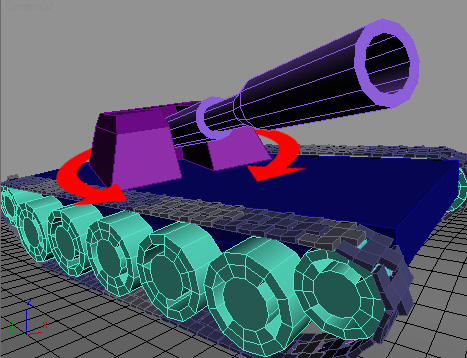 We're going to use this file, this is a 3ds max 9 version file.

Download File
Extract it in your pc and open the tank_rig_start.max file. Here we got a basic tank model: the frame, turret, cannon, a wheel (we'll clone the others), a caterpillar piece, and the ground. this last one was made starting with a plane with a lot of segments and some noise and wave modifiers aplied to it. Also, we got some red spline objects and two points, they have an important function, we are going to use them as animation controls, the animator will only animate these objects (Just for manual adjustments), and the rig will do the magic!, so, they must be visible and accesible enought to help the animators reconize and select them as soon as they want interact with the rig system. i choose hot red as its color, but you may choice the color you like, preferably a very light and saturated color. We got a spline too, which is going to define our tank's path, when we finish our rig this spline could be modified as you like, moving, removing or adding vertices.