The cannon base will have a look_at constraint, also the turret but only over its z-axis. For both objects we need to create a point helper that finally contains the look_at controller, the objects will inherit their rotation. 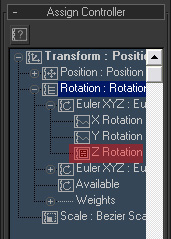 There are some methods to get the rotation of an object that has a lookAt constraint, like using wiring with an ExposeTM Helper, which exposes an object's transform values, even if it has any constraint assigned. But, I prefer to use script controllers, because i don't need to create any extra object to make it work.

Select the Turret, in the motion panel -> Assign Controller rollout, select the Rotation: XYZ Euler Controller and assign a Rotation List controller to it. As mentioned before, this controller will enable us to have two controller layers, the first with the script controller and the other one to make manual adjustments.

In the expression, first we need to find the local rotation values of the helper, that's because the controllers need values in local mode (local values in max are respect to the parents). we can do that using the transform values of this helper and its parent.

The way that a 3d software inherits the transform values from an object to its children is to multiply the parent's transform matrix by it's children local transform matrix. having in mind this, we may find the child's local TM by doing the inverse process. In math the inverse process of multiply two matrices isn't divide them, it's a special process called "Inverse", max has a maxScript function for this.

From this resulting transform we need to extract the rotation value: (helper's transform * inverse parent's transform).rotation

Then we need to convert this rotation from Quaternion values to Euler angles values in order to be able to get its Z rotation value. To don't make the code line too long, i assign this rotation to a variable and continue in the next line.

So, it goes as follows:

For the helper we're gonna create a variable called helper_lookAt assign the Helper_lookAt_Turret as node. we can get the parent node as an object's property. The expression finally goes as below.

degtorad is a need because the controller handles rotation values in radians. 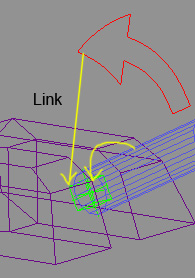 The Cannon_base will need all the rotation values from its helper_lookAt. we cannot assign the lookAt constraint directly to the cannon, because we wont be able to make manual adjustment to it. We could assign an extra Euler XYZ controller in the rotation list for manual adjustments, but it will have unexpected behaviors when we rotate it (this problem happens in rotation controllers only, in position controllers it doesn't happen, and in the turret case, it doesn't happen either because we're using only one axis there).

Doing this the cannon will inherit the helper's orientation, and also we'll be able to make manual adjustments.

You can move the Control_Target to check this out!.

Ok, and finally this is it!, out tank rig is done!. you can animate the Control_Main object throw the path spline and also modify this spline as you like.

To adapt your tank final model to this rig, you only need to align and link the model's parts to the tank's objects. And if you want a rig more comfortable you can create layers in the max layer manager, one for helpers, other for Control objects etc. Also you could block some position and/or rotation axis in some objects (Hierarchy panel -> Link Info Button), for example in the turret's x and y rotation axis, to avoid movements that aren't posible in the tank. The rig objects like the Frame or the turret are geometric objects, but if you like they could be bones, finally both are nodes. Finally like any other rig you have to be careful with scales.

I hope you enjoyed this tutorial, more stuff will come soon!.