Hide the Frame, the turret and cannon objects. Select all the wheels, helpers, pieces, and control objects of the right side. You can do it in the top view drawing a selection rectangle over all the objects (see picture below), unselect the ProjectedPlane after this. Press ctrl+v, and check copy in both options.

Select by name the Helper_Attached_14, in the motion panel change its A and B values to set its new position (probably you only need to set A=0), do the same process with the 13, 12, 11, and 10 Helper_Attached objects. The front wheel will be different, change its Face number too (Face=2), set A=1 and B=0, and rotate it 180 degrees over its local z-axis.

Now, select all the Control_Wheel objects and change its object position with the "Affect Object Only" button activated in the hierarchy panel, put them in the opposite side of the wheels.

Our Frame orientation and position system is done!, you can check it out by moving the wheels over their z-axis.

Just like we did before with the wheels' control objects, we're gonna do the same with the Frame, turret and cannon objects.

Unhide all, Select the Control_Frame and align it to the frame, check all the position and rotation axis and the pivot option in the "Target Object" group. With "Affect Object Only" button in the hierarchy panel, create an orientation and position offset until you find a good place and orientation for this object (see picture below). Since this control object will have the same transform controller of the frame, is good to align its pivot to the frame to ensure we'll have the same position and orientation after copy-instance the controllers.

Do the same with the rest of the control objects with their respective tank objects. 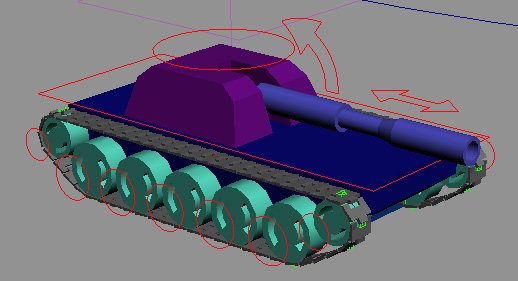 Create the hierarchy of the tank's parts, link the turret to the frame, the cannon_base to the Turret and the cannon_extension to the cannon_ base.

In the track view copy-instance the transform controllers for each object and its control object, you can do it easier in the mini curve editor.

Now we can get the projectedPlane where it was before, select it, align it to the Control_Main (position and orientation) and activate its Conform Binding Modifier.